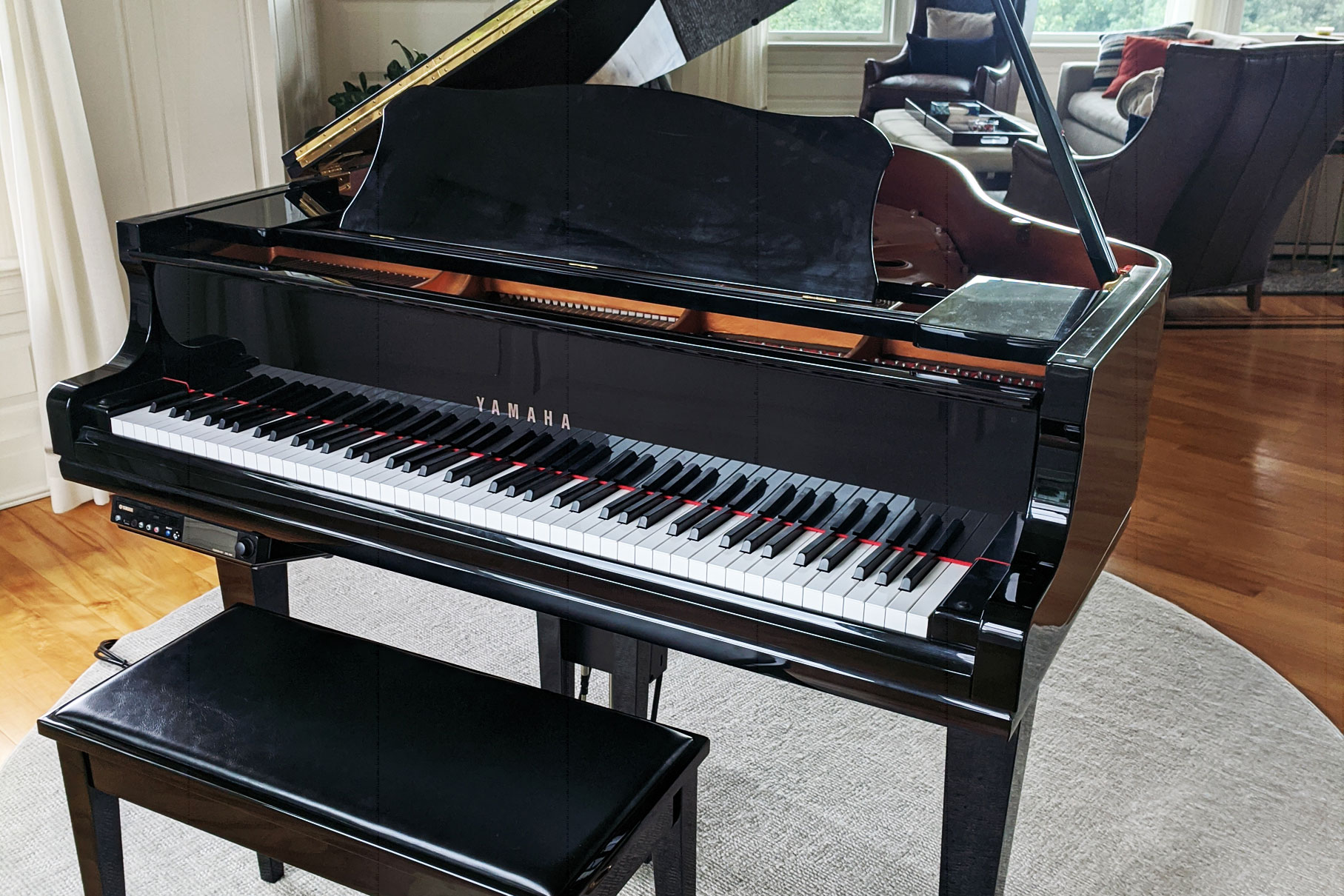 If you have a previous generation of Disklavier and haven’t updated its firmware since October of 2020, it is absolutely necessary to update it before attempting to connect to the internet. Your Disklavier will tell you it isn’t connected to the internet no matter what you do until the firmware is updated.

You can link directly to this page with https://setupdisklavier.com.

Yamaha Disklaviers are an innovative fusion of digital and acoustic engineering. They allow you to experience famous, concert pianists performing right in your living room, on your own piano. They’re an excellent tool for both entertainment and for learning. And of course, they’re just fun to watch. Check out this beautiful 2009 Yamaha GC1 Disklavier playing Billy Joel’s Piano Man that I recorded last summer.

They do have one drawback: Connecting them to WiFi networks can be confusing and difficult. Is your Disklavier acting as an access point, or is it connecting to your WiFi? Is it doing both? Can you tell from the instructions what you’re expected to do? Do you even have all the parts you need?

I’m sharing an incredibly elegant, simple way to hook up Yamaha Disklaviers. You don’t have to worry about reconnecting it if you change your WiFi password or buy a new router. You can set it up quickly, and it works in most houses.

1. NexusLink PowerLine Ethernet Adapters These devices allow you to network through the electrical lines in a house. Using this, your piano will believe it has a physical connection.

All you have to do to keep your piano connected is plug them in!

Before I go to a customer’s house, I label one of them with “Piano,” printed in 18pt text on a piece of plain white paper and covered with tape. It’s much less likely to get unplugged this way!

(All communication is encrypted between the two devices, so it’s not possible for somebody to hack into your house using the powerline! If that was a concern of yours…)

Remember that you need two!

2. GE Designer 3-Outlet Surge Protector (pair) This is an 8-foot extension cord with a three port power strip on the end. It calls itself a surge protector, but doesn’t do any regulation or conditioning which might interfere with the NexusLink signal.

I did a tear-down of the device to make sure there were no surprises: Surge protection is achieved through a metal oxide varistor, and there is no voltage regulation beyond that.

3. Black CAT6 Ethernet Cables (1 foot and 3 feet) With all piano work, subtlety is a must. Anywhere black or concealed equipment can be used, I use it. Underneath a piano you won’t generally need more than one foot of ethernet cord.

4. Scotch Interlocking Fasteners These are strong, interlocking fasteners that aren’t vulnerable to vibration, and are strong enough to hold up the end of the extension cord.

And now, we get started…

Remove the two NexusLink Adapters from their box and plug them both into the outlets where you intend for them to go—one next to the router and one in the extension cord you’re going to be putting underneath the piano, plugged into the closest to the piano. No ethernet connections are necessary at this time.

If the green connection lights on your NexusLinks turn on (the top light on each adapter), that means they’ve found one another, and are now communicating through your household power. Great!

Now you can secure their connection to each other. On the bottom of each unit (near the ethernet jack) there’s a small configuration button. Hold it down for three seconds, and the bottom of the three lights—labeled with a padlock—will begin to blink. Now press the same button on the other NexusLink for three seconds. After a short period of time, the padlock lights will turn solid. Then, some seconds later, the connection lights should turn solid as well.

These two NexusLinks are now a permanently bonded pair. No matter where you put them, they’ll find one another. So tightly paired that they’ll even ignore other NexusLinks.

2. Run the extension cord up underneath the piano

Take two pieces of your Scotch Interlocking Fastener and, after removing the backing, mount both to the back of the power strip on your extension cord. Pick a good spot to mount the power strip underneath the piano. This is usually parallel to the floor on the side of one of the wooden beams adjacent to the Disklavier controller.

Clean that spot thoroughly with alcohol, or with mildly soapy water. Once completely dry, remove the sticky backing from the other side of your Scotch Interlocking Fastener and mount the power strip to the beam.

Plug your other NexusLink PowerLine Ethernet Adapter into the bottom port of the three of your power strip. Run a short length of Ethernet cord to your Disklavier controller. If possible, loop the ethernet cord up over the beam to apply a little bit of tension—the less that’s loose under there better, as pianos produce plenty of shaking and vibration. Use no more cable than you need.

Now plug the Disklavier power into the power strip (and the Dampp-Chaser as well if one is installed). This extension cord is comfortably rated for the power consumption of all three devices. (Also, make certain if there is a Dampp-Chaser installed, that the NexusLink isn’t near the humidistat, where the small amount of heat it produces might cause less accurate readings.)

At this time, both the green connection lights should be on, as well as both the padlock lights, meaning the NexusLink Adapters have discovered one another. If this isn’t the case, skip to the troubleshooting below.

Use zip-ties, twist ties, and other appropriate cable management to bundle everything up and out of sight. Stick-on conduit can be used to run cords along the beams if precise positioning is needed, such as if the piano is positioned next to a low couch or somewhere else people might easily see underneath. I’ll actually sit in various chairs in the room and look at the piano.

You’re all done! Unless you aren’t. If it doesn’t work immediately, read on.

No connection! What went wrong?

Do NOT plug them into a power strip or surge protector if you can avoid it. These often filter out the signal. Only very cheap power strips, as well as a handful of minimalist extension cords (like the GE one I recommend) will not block the signal. When in doubt, plug right into the wall.

If the outlet isn’t receiving power (or is switch controlled), it won’t work. Try every outlet reasonably available for both adapters.

If the house has multiple breaker boxes, then the devices might not be able to see each other.